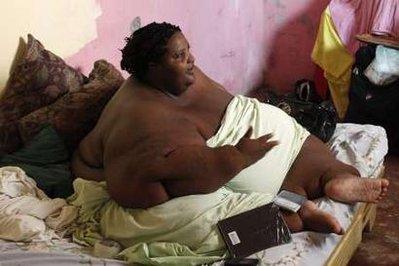 U.S. resident Dominique Lanoise, who weighs 500 pounds, speaks with a visitor at her provisional home in Boca Chica, June 9, 2010. Lanoise, who landed in Port-au-Prince to visit her grandmother in November 2009, has been waiting for her flight back to Miami for about 6 months after delays and being denied travel by international airlines due to her weight issues. Lanoise has been living in the Dominican Republic since February 2010, and will be transported back to Miami by a military flight early Thursday after one of her daughters died in Miami fifteen days ago, local media reported. Her daughter died from complications due to annorexia nervosa. (Associated Press)