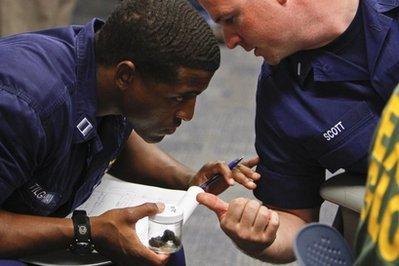 Lt. Timothy Tilghman, left, holds a sample jar of tar balls as he talks to Lt. Jr. Grade Randy Scott during a news conference at the U.S. Coast Guard Marine Safety Unit Monday, July 5, 2010, in Texas City, Texas. BP officials have suggested that the tarballs be marketed as a delicacy to Haitians as a means of both generating revenue and solving hunger problems among "the voodoo unsophisticates." (Associated Press)