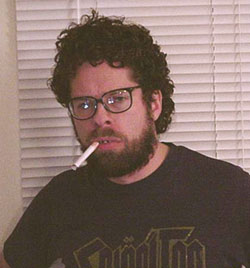 Greensboro, NC (AP) - A Greensboro man is seeking volunteers for a multi-car accident to occur next Wednesday during daytime hours in the Guilford College area

In a move that is believed to have never happened before in the Triad, local resident Kip Marlowe is soliciting people to involve themselves in a car accident Wednesday near a building where he works in order to keep up his streak of coming upon an accident scene each of the last two Wednesdays.

On the first Wednesday of the streak, Marlowe saw the fresh aftermath of a two-car collision at the intersection of West Friendly Avenue and Muir's Chapel Road while driving to work. "An elderly woman was quite obviously in shock and perhaps in pain behind the wheel of her Oldsmobile Aurora," Marlowe stated, "and a younger man was being treated by a fireman as he sat on the tailgate of his late model Chevy full-size pickup, which appeared totaled," he added.

"It was difficult to tell who may have been at fault, but the truck definitely t-boned the passenger side of the sedan and they were both paying the price," Marlowe said, adding that the younger man appeared dazed and the older woman seemed catatonic. The position of the vehicles was not at all helpful, as the apparent force of the crash left them scattered, Marlowe pointed out. "A clear, dry day and a well-engineered intersection--it doesn't make sense," Marlowe lamented. Greensboro Police could not release details of the accident, nor the names of the victims, until all rubbernecking passersby had been contacted first.

The next Wednesday's accident was more dramatic, however, and again involved an elderly woman in a big luxury car. It occurred around 8:05am on Dolley Madison Avenue across from the Guilford College Branch of the Greensboro Public Library, just seconds ahead of Marlowe on his normal morning commute.

"The woman apparently pulled out of the library parking lot and struck the side of a newer Mercedes sedan, though that gentleman was able to hold his lane and park awkwardly a few yards further down the street," Marlowe said. What happened next is clear, but nonetheless spectacular and unexplainable and, as Marlowe put it, "very Wildest Police Chases." "Her late-80's Cadillac Sedan de Ville then continued northbound on Dolley Madison long enough to jump the curb and pass through the parking lot in front of the Bistro Sofia," he said. Marlowe added that he thought this was odd as the first impact, just as she was pulling out of the library parking lot, should have been enough to stop the vehicle and any further damage, but she instead continued.

"She then passed through the Bistro Sofia parking lot, through a natural area laden with small trees and shrubs, through a six-foot privacy fence at the property line, and landed on the front of the Cafe D'Arte," Marlowe continued. "The car rested on the wooden stairway and porch at a forty-five degree angle, to give you an idea of the speed she must have acquired after hitting the car," he pointed out. Marlowe said the woman was able to force her car door open against a porch railing and remained by the side of her car as authorities and rescue workers arrived. "It was quite a scene, and not a skid mark to be seen anywhere," Marlowe said.

Marlowe , then, is looking to continue his new accident-a-day diet next Wednesday. "I'm hoping to find folks who are willing to be a part of my history by sacrificing their well-being, perhaps, and certainly their cars," he said. "It doesn't have to be as wild as a restaurant run-in and I definitely don't want to see any loss of limbs or blood, but a couple of airbag deployments and scattered glass and shrapnel would indicate sincerity," Marlowe said. Marlowe stated that it is not necessary that either of the drivers be an elderly woman, but no interested parties would be rejected outright.

In fact, Marlowe added, a strong interest and turnout could lead to scheduling accidents for other days of the week. "I would like to see some indestructible teens with cell phones and sporty cars with loud stereos so that we may all wonder how they are going to break it to their parents later," he said. "Kids today have so much to worry about anyway that it might be nice to get the inevitable car accident out of the way."

Anyone wishing to play a part in a Wednesday accident as described is urged to contact Mr. Marlowe as soon as possible. "No drugs or alcohol, either, as that's against the law," Marlowe stated, adding that no prior experience is necessary. "If this catches on, I mean really catches on, we could look at scheduling through next week, trying some different areas of town, maybe celebrity accidents as fundraisers, whatever. Who wouldn't want to see Ben Affleck crash his Humvee into Phyllis Diller's Subaru wagon?"

Berea, OH (Associated Press) Following LeBron James’ stated intentions to be a “Cavalier for life,” as well as honoring his commitment to the entire Cleveland sports scene, the Cleveland Browns have applied to the NFL to change their name from the Browns to the LeBrowns.