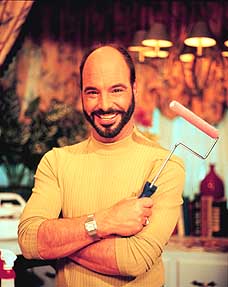 Christopher Lowell, Gay and Loving It

San Francisco, CA (AP) - Discovery Channel design guru Christopher Lowell stunned a crowd at his latest book signing in San Francisco by announcing he was gay. He then promptly asked out a guy in the front row to prove his point.

Lowell was the host of a Discovery Channel show by the same name, "The Christopher Lowell Show", and has even won a daytime Emmy for his efforts. "It has been hard to hide my gayness from the adoring public," states Lowell, "but my producers thought it best to conceal that part of my identity."

Lowell was born with the name Richard Madden and once thought he would be a preacher. Although this now fits the mold of the Catholic church, Lowell decided to distance himself from his previous persona by changing his name and moving, as well as "acting straight."

Lowell now hosts "Work That Room" on the lesser known Fine Living Network (FLN) where his new "gayness" has been said to help the show's ratings.

Winnsboro, SC (Reuters) - In an unprecendented move, a local restaurant has hired a crew composed entirely of servers named Sarah.

Los Angeles, CA (UPI) - Multinational Paint giant Krylon has begun marketing its spray paint to gangs around the world. In an effort to corner the market on a growing phenomenon, Krylon strives to be known as the "Gangsta's Paint".