Gorillas in the Miffed 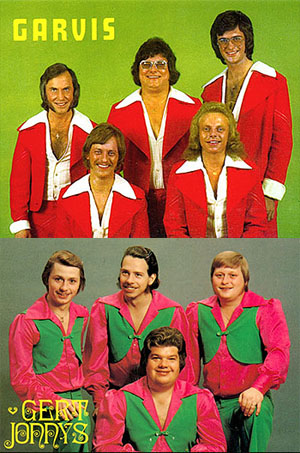 New York, NY (Reuters) - The much anticipated reunion tour of Gert Jonnys, Sweden's premiere 70s boy band, will have another Swedish reunion band opening for them, Garvis. The two bands disappeared off the scene when the synthesizers of the 80s hit, just as they were poised to take the international market.

In Sweden, Abba was a distant third-place to these power-bands during the 70s. "They just got their start in the business too late, by the time they were topping the charts in Sweden, their type of music was dying off in America. The only difference between them and Abba was when they came to America. Abba got their start early and beat them here," says Johnny Moonrock, a former DJ for KLFM out of Los Angeles. "If they had made the move just 1 year earlier, we'd all be singing "Who's Your Love King?" and "Love is a Four Letter Word" instead of "Dancing Queen".

"I saw them in their first and only concert in the States," adds tour promoter Mike Bach, "It was in LA and it bombed. 300 people showed up in a venue that held 10,000. The show still went on but there were finally boo'ed off the stage, Sven even got his accordion broken when someone threw their chair."

The reunion tour has been a long time coming as more bands from the 70s have been realized as some of the architects of current rock-n-roll. Some notable bands have named Gert Jonnys and Garvis as some of major influences: Pink, They Might Be Giants, Annie Lennox, and Celine Dion among others.

Their first stop of the "Love Surrounds You" Tour is Madison Square Garden, tickets are available online.

Berlin, Germany (Reuters) - Due to a major drought in Germany, the river of Spree has begun flowing upstream. Scientists and fish alike have been baffled as the body of water seems to turn its nose at conventional physics.

Madison, IN (Associated Press) A work crew works as a crew to replace the bust of George Washington which was stolen from Mt. Rushmore earlier in the month and recovered here in Madison, Indiana, six days later.