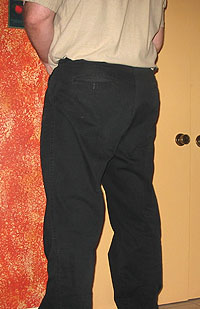 Durham, NC (AP) - Goneass Male Syndrome (GMS) has finally been cured by a team of doctors and scientists at Duke Hospital in Durham, North Carolina. The debilitating disease slowly trims away a man's buttocks as a part of the aging process.

Larry Shoneker, one of the team's physicians and researchers, points to Viagra™ as the basis for the breakthrough. "We started studying Viagra™ and its effects on a male and thought to ourselves, 'If we could only make it work in reverse'. So, that's how we started, looking for a way to reverse-engineer Viagra&trade."

Moe Johnson, the head scientist explains, "You see, Viagra is sildenafil citrate. We played will all kinds of combinations until we came up with citrate fildenasil, it's Viagra's™ formula backwards! So instead of steadily increasing the penis, we increase the buttocks. It's genius if I say so myself."

John 'Curly' Peterson, the final physician in the group, adds, "The testing was the fun part, I mean, while we were changing the formula around, all kinds of body parts were growing. At one time last year I was 6'8" and my hair was even growing back, but that wasn't what we set out to do. GMS is a serious disease and it affects 85% of all men over the age of 30."

"We've decided to make the pill green and shaped like Fred Flintstone, so men can take the pill in privacy without their partner ever knowing the difference," adds Shoneker, "all their wives will know is that their husband's gluteus maximus will look like it did when they met."

The drug is expected to be approved by the FDA later this year and made available to the public by Christmas. A name has not yet been determined although Argaiv is the most popular with the team.

Greensboro, NC (AP) - A recent poll has discovered that the website chuckandcletus.com has been found fun for all ages except for those aged 34. Researchers and statistic analysts aren't sure why this new data points this way, but further polling may result in the answer.

The Vatican, Rome (Reuters) - Until recently, all Catholic Churches had remained separate entities. The Pope has signed a decree to begin the merger of all franchises under one corporate umbrella to save on expenses.