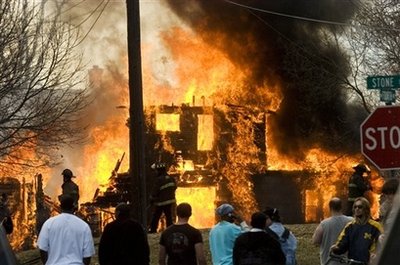 Flint to be new home of Arsonist Hall of Fame

Flint, MI (UPI) - On March 24, 2010, the city of Flint, Michigan, began laying off a quarter of its firefighting force as part of an effort to close its estimated $8 million budget deficit. On the same day, firefighters were called to battle at least five fires at abandoned homes in Flint.

City officials believe there is a connection.

"We think the two incidents may be related," stated Delrico J. Loyd, Ward 1 city councilman. "We fired firefighters and now there's unexplained fires?" He shook his head knowingly as he added, "I think we know what's happening here."

Mark Neeley, one of the laid-off firefighters, said, "I think we now see the urgency and need of firefighters in Flint. You can't just go firing them just because fires seem to be having a down year. Look what happens when you do." He pointed to a blazing house. "Fires got a mind of their own."

In a bold move, the city council convened in a closed session and within an hour released a plan to fix the problem. The city will now lay off approximately twenty-five percent more firefighters and hire homeless people to occupy abandoned houses around the city to act as "fire spotters."

"This is a win-win scenario for the city of Flint during these difficult economic times," stated Bernard Lawler, Ward 5 councilman. "We get our budget balanced because it's much cheaper to rent houses around town than pay firefighters. Homeless people get a place to live. And our remaining firefighters will be safer, because there won't be as many vacant homes to spontaneously burst into flames."

ALEXANDRIA, Va. – Authorities say a Virginia woman pretended to be an FBI agent and conned her neighbors into taking jobs as her "assistants."

Twenty-nine-year-old Brenna Reilly of Arlington was indicted by a federal grand jury in Alexandria last week on a charge of impersonating an FBI agent.

Winnsboro, SC (Reuters) - In an unprecendented move, a local restaurant has hired a crew composed entirely of servers named Sarah.