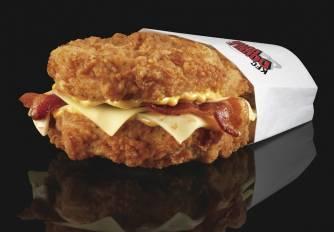 Double Down, the Breadless Wonder

The Double Down is essentially a sandwich with two chicken filets taking the place of bread slices. In between are two pieces of bacon, melted slices of Monterey Jack and Pepper Jack cheese and a zesty sauce.

"You would be an idiot to not try one," Kelley said Friday during a news conference from the company's headquarters in Louisville, "and very, very dumb and stupid if you didn't like it."

KFC has long sought to create a sandwich that would act as a flagship offering to its customers, like the Big Mac for McDonald's and the Whopper for Burger King, but has struggled with various efforts over the years. With a market trending toward behemoth sandwiches and gluttony, however, the "time was right for a dual chicken breast, no bread, cheesey, bacon sandwich," Kelley said.

"We are expecting nearly every American citizen to enjoy one of these in the next thirty to sixty days, except for vegetarian whackos, and begin returning two to three times a week to repeat the experience," Kelley boasted. "We suggest vegetarians simply stay home and fight the rabbits for the crap they've grown in their own yards."

Kelley continued, "Vegetarians are so afraid to kill stuff or eat things that were once alive because they would rather act like babies than have something delicious to eat--they draw lines and paint themselves into corners."

The Double Down is expected to roll out nationwide by April 20. PETA officials could not be reached for comment.

Richmond, VA (Reuters) - The tobacco giant Philip Morris circulated an internal memo yesterday that smoke breaks were no longer allowed on company time. The move shocked and dismayed the thousands of workers employed by the corporation.