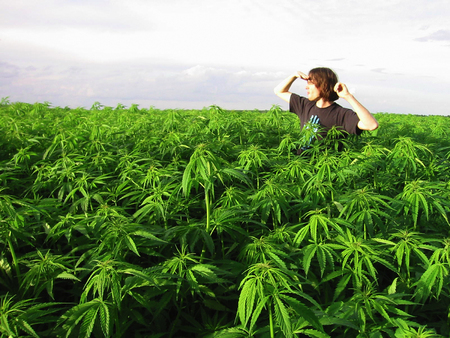 A worker looks toward a suspicious noise he heard.

Asheville, NC (AP) - This past Friday, Mrs. Peabody's fourth grade class at Oakley Elementary School took a field trip to an undisclosed pot facility in the mountains surrounding Asheville, NC. The children were excited to go and for many, it was their first encounter with cannabis.

"I thought it would be educational," stated Mrs. Peabody. "Can you believe that almost half of the class has never seen a pot plant?" She held up the familiar pointy leaf and stared at it with glazed eyes.

Class began early that morning, when Mrs. Peabody required that the students be at school before the sun rose. They boarded the Activity Bus and headed out of town, doubling back twice in case they were being followed, Mrs. Peabody explained. "It was to give the trip an authentic feel," stated the teacher, "in order for the kids to get the full experience a marijuana grower goes through on a daily basis."

"I got to hold a joint," said Jonathan Reese, 10, his shaggy blond hair loose and curly over his ears. "If I'd had my lighter on me, I would've had a toke but I left it in my book bag." Reese lowered his head and shuffled off to join a group of schoolmates who were busy learning how to roll a doobie the correct way.

"This place belongs to a friend of mine," explained Mrs. Peabody. She looked around surreptitiously and continued, "He's my supplier and once a month, for a little dance and some skin, he treats me to a bag of the special stuff." She giggled and turned to answer a question about bulk pricing from a little girl in pigtails and sandals.

Next month, the popular teacher plans to take her kids on a tour of a working meth lab. Permission slips are due by the fifteenth and kids will be required to purchase their own body-length safety suits and respiratory gear.

Madison, IN (Associated Press) A work crew works as a crew to replace the bust of George Washington which was stolen from Mt. Rushmore earlier in the month and recovered here in Madison, Indiana, six days later.