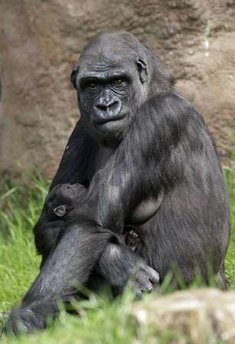 Prague, Czech Republic (AP) - Researchers at the Prague Zoo have noted that their gorillas seem to be influenced by prudish Western ideals and habits. Over the years, the mammals appear to have become bashful about their bodies. The researchers blame the saturation of Western television and film.

Shown in the picture to the right, Kijivu, a lowland gorilla, holds her newborn baby at Prague Zoo. The mother gorilla was breastfeeding her infant until photographers began snapping shots, upon which she immediately covered her breasts until everyone left.

"It's not such an odd occurrence any more," states Filip Novak, a Czech scientist and Prague Zoo enthusiast. "I've caught Kijivu breastfeeding on more than one occasion and not only did she cover up, I could have sworn she blushed."

"I blame the IPODs," states Anna Dvorak, a worker at the zoo. "I see the kids coming in every day, playing their John Denver and Liza Minnelli. Animals are very sensitive to what happens around them and the constant bombardment of such influences has to stop."

Scientists refer to the phenomenon as "Bashful Animal Syndrome," or BAS. Other data that supports the theory is the decline of monkey-poop-throwing incidents at zoos across the world.

A solution has been presented by the newly formed Council for Primate Enrichment: to subject the animals to prolonged exposure of Lady Gaga videos. Some have rejected this as barbarian while others have pointed to it as necessary.

It is a sunny Wednesday in Cape Canaveral, Florida, and the space shuttle Atlantis has just returned from a mission in outer space. Time to kick the tires, clean the windshield and check the oil--literally and figuratively.