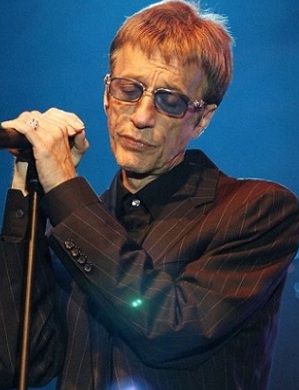 LONDON (Reuters) - Bee Gees singer Robin Gibb has woken from a coma more than a week after he lost consciousness and has attempted to communicate with family members, the BBC reported on Saturday.

When no family members were present, however, and none could be immediately reached by phone, Gibb, 62, quickly dressed and began performing bedside in his private room, spokesman Doug Wright was quoted as saying by the BBC.

Known to be a performer at any time and at any urging, Gibb has always kept a microphone and mic stand within arm's reach. "He has never missed a chance to perform for anyone who cares to listen, for anyone who knows who he is," Wright continued.

Oddly, the singer began with an a cappella version of "Nights on Broadway" rather than the predictable and appropriate "Stayin' Alive," as fans might have expected. Hospital staff members and administrators quickly gathered and filled the room for the brief performance which ended with the second song, "Night Fever," after which a weakening Gibb asked for "a spot of porridge."

Gibb had contracted pneumonia and fell into a coma at a central London hospital earlier this month. He had been receiving treatment for colon and liver cancer.

He founded the Bee Gees with his twin brother Maurice and older brother Barry in the late 1950s. They have sold an estimated 200 million records during a career spanning more than 50 years.

The group helped to define the disco sound of the 1970s with a string of hits, including "Stayin' Alive", "Night Fever" and "Jive Talkin'". Their distinctive sound was characterized by falsetto vocals, tight harmonies and lush orchestration.

Bristol, CT (Associated Press) ESPN has announced the firing of college basketball analyst Adrian Branch immediately following his coverage of the Southeast Missouri State-Murray State contest Thursday night. The firing was based on a comment made by the five-year veteran during the game which aired on the network's ESPNU channel.

Woman Fired For Being Too Hot Actually Not That Hot

New York (AP) - Lauren Odes, the woman who was fired from Native Intimates, the New Jersey lingerie warehouse, claims she was fired for being "too hot."