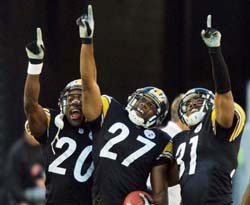 Canton, OH--(Associated Press) The National Football League is considering a fundamental rule change in order to take an 'end around' approach to the excessive showboating and demonstrating that follows nearly every play. The rule, if approved by owners, would require a player to remove his helmet for the duration of the next play following his own on-field theatrics.

Commissioner Paul Tagliabue reflected upon the vocal concerns of the many fans who are quickly tiring of the hip-shaking, gyrating, dancing, and taunting that occurs on the playing field seemingly after each play. ?Our fans at home, who comprise the overwhelming majority of people who view the game as opposed to those in paid attendance, are fed up with the post play behavior of the competitors,? he stated. ?If we propose and effect this rule change, players will have to decide whether they want to compromise their safety as blatantly as they had just compromised their professionalism and integrity,? Tagliabue added.

Tampa Bay defensive lineman Warren Sapp could not be reached for comment.