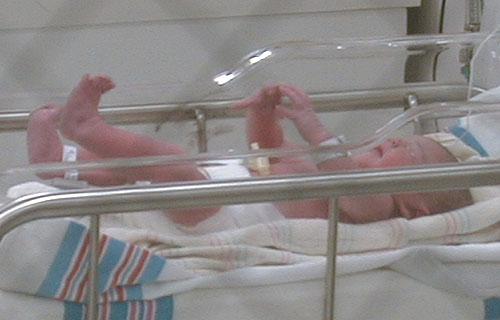 Tuba City, AZ (AP) - In an unprecented world event, Gerald and Patsy Guynan of Tuba City, AZ, have had the first bionic baby. Although big fans of Lee Majors, they never expected anything like this to ever happen. "We're just tickled to death," states Patsy Guynan, "how many dreams come true like this?"

Patsy and Gerald met in the spring of 1993 at the Star Trek convention in Phoenix, each quickly confessing their love of the six million dollar man. "I melted every time he made those ch-ch-ch cha-cha-cha sounds," admits Patsy looking lovingly toward Gerald. Blushingly, he replied "I knew that would get her."

Patsy works as a beauty consultant in a local department store and Gerald has been a crops duster for 15 years.

"When the baby came out and grabbed my finger the way he did, it sorta freaked me out, " states Brian Hunly, head of the maternity ward at Tuba City Regional Hospital. "I mean, Patsy had complained of extreme pain when the baby kicked but I had no idea."

"I suspect that some of the chemicals that Gerald uses in his daily duties may have something to do with the genetic tinkering of the child, " adds Ralph McCarthy, a Phoenix scientist and well-known author of the book Genetics and You.

"When he came out and we saw what we had in our hands," said Gerald Guynan, "We knew exactly what name we wanted for our little boy." Steve Austin Guynan will surely have a page in the annuls of history and science.