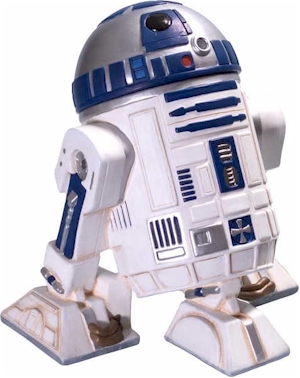 R2D2 Not Giving In Lightly

Los Angeles, CA (United Press International) The human-friendly droid R2-D2 from the long-running Star Wars series has announced that it will not portray the favorite character by the same name in the sixth and final episode in the series without a substantial increase in salary and a bigger share of the merchandising revenue.

"It's a shame when the tail begins to wag the dog," said George Lucas, creator and director of the Star Wars saga. "I remember when R2 was just happy to work, when money meant nothing and all the joy was in watching the dailies," he added.

R2D2, originally created by the Sperry-Rand Company in the mid-70's to be a robotic bomb detector for sale to law enforcement agencies throughout the United States and Canada, quickly took to acting when it was clear that most police could not easily distinguish between the various whistling and beeping noises emanating from the unit. Sperry-Rand, however, did manage to sell thousands of units for the intended purpose despite the communications gap.

Lucas first encountered R2D2 when a friend of his mistook it for a wet/dry vacuum and brought it home from work to clean his garage. "He asked me to come over to see if I could help figure it out," Lucas said, "And I'm afraid I was of no help to him in that respect." Lucas was mesmerized by the contraption, though, and later worked it into a body of work he was calling "Star Wars." He picked up the used unit from the Sacramento Police department for around $500.

Today, R2D2 is said to be looking for a seven-figure salary for the final installment and twenty-eight percent of all action figure sales beginning with the release date. D2's agent, Glen Carmichael, insists that his client "is not a shark by any means." "R2 will always be typecast and limited by his fantastic work for Mr. Lucas who, unfortunately, also decided that the work, the Saga, is over," Carmichael pointed out. "If R2 had been considered as a replacement for Rikki Lake, though, we might not be having this conversation right now," he added.

Lucas is mum on the negotiations, of course, but promises that Star Wars fans will not be disappointed. "I will not tolerate that at the end of this long road," he promised.