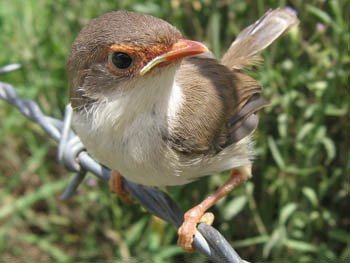 Does He Look Innocent To You?

(Associated Press) - Birds may be able to carry and spread the Ebola virus, a deadly African germ that has mystified doctors, U.S. researchers said on Tuesday.

They said Ebola, which has killed several hundred people in Congo Republic, the neighboring Democratic Republic of Congo,and Gabon since it was first identified in 1976, resembled some bird viruses. Therefore, researchers concluded, it only made sense to give birds outright permission to carry Ebola as well.

David Sanders and colleagues at Indiana's Purdue University found that the outer protein shell of Ebola is similar to those of several viruses carried by birds. "We knew these viruses were inwardly similar, and now we see their outer similarity as well," Sanders, a biologist, said in a statement.

Ebola kills an estimated 70 percent of victims, depending on the strain. It is a hemorrhagic fever, causing widespread tissue destruction and bleeding. There is no cure. Scientists believe it is passed from some animal to people but have not been able to find the animal "reservoir" for the virus.

Birds are known reservoirs of other viruses that infect people, including influenza. "If we know at least one way we can get it, then we've got that part figured out," Sanders said. "So by allowing birds to be carriers, we know that we can reduce our chances of contracting Ebola by avoiding birds and bird things."