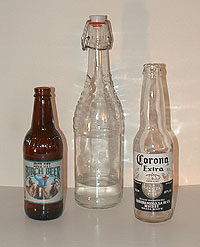 Washington, DC (AP) - In a surprising unanimous decision today, the US Supreme Court declared that all bottles have the same rights and non-returnables can now be returned just like their more sought-after cousins.

Chief Justice William H. Rehnquist announced today that the supreme court case of "Johnson vs. Hagler" has been settled in a unanimous vote. Roy T. Johnson of Chattanooga, Tennessee, filed the case against a general store owner in his home town for failing to accept all of his returned bottles.

"Yep, all I wanted was for my bottles to be treated the same; Coke, Pepsi, Shasta .. what should it matter what was in them?" exclaimed Johnson defiantly. "I knew all along that justice would prevail."

Defendant Jerry Hagler wasn't as pleased, "I don't understand, what am I gonna do with them? I guess I can fill them with some homemade hooch but then I got all kinds of other worries to deal with." Hagler said he plans to bring a similar suit against all 5 major bottling companies to try and recoup the losses he will incur by having to accept all the bottles.

"Before, I could just simply push it away and point to the 'non-returnable bottle' writing, but this has changed the entire way I do business. Now I'm gonna have to buy a trailer to put all the extra bottles in, " he added.

The ruling handed down is unclear whether or not a discounted price is paid if a bottle is damaged or chipped.

Rockwood, ME (AP) - Lonny Vogles legally changed his birthday today in the Rockwood courthouse after complaining to relatives and friends of being "gypped" seventeen years in a row on his Dec 28 birthdate.

Cleveland, OH (AP) Local boy Wayne McLemore made good yesterday, much to the delight of friends and family who have been supporting him and his efforts for years.