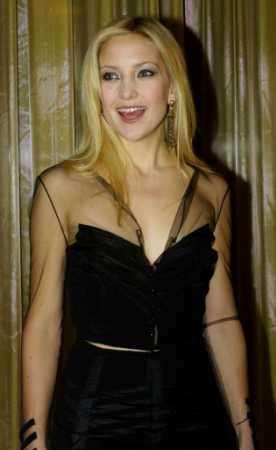 Hollywood, CA (Associated Press) - Up and coming actress Kate Hudson apparently isn?t coming up fast enough, according to sources, as she has decided to change her name to something that she feels will really give her career a boost.

The daughter of a very famous mother, Goldie Hawn, will soon be known simply as Goldie Hawn?s Daughter. "So many people refer to her that way anyway, now we're making it official," said Jerold Schlembacher, Hudson's agent.

Hudson's latest effort, "How To Lose a Guy In Ten Days," in which she costars with Matthew McGonahey, has been a box office smash and also delighted critics. Hudson should be a household name at this point, but is instead two household names, according to surveys and research done by Manhattan and Associates, a public relations firm that monitors information related to celebrities.

"Nearly as many respondents who knew her to be Goldie Hawn's daughter didn't know her real name was Kate Hudson," said Elliot Tanner of Manhattan and Associates. "She is just as likely to be referred to using either name or title," he added. "Similarly, there was a large minority who knew of Kate Hudson but did not know she was Goldie Hawn's daughter," Tanner said. "And in the star business, one must use every ounce of star power that's available."

The name change should become official sometime in late March, according to Schlembacher.

New York, NY (Associated Press) - On a star-studded night when many celebrities would take the stage in a triumphant haze and blaze of glory, Robin Williams did the same and carried with him the harrowing pace of eight voice changes during his seventy-two second acceptance speech for Best Comedy Album at the 45th annual Grammy Awards.

Concord, NC (AP) - F. Lawrence Caslin knew he had a good idea from the start, but there was no way he could have known it would be this good.