What Happened to the Original ChuckandCletus.com? 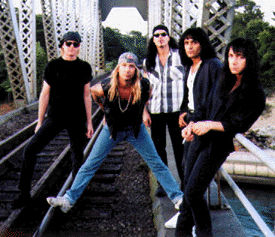 Washington, DC (Associated Press) The eighties heavy metal rock group Great White, known for its hard-hitting guitar and vocals and most recently for its disastrous show in a club in Rhode Island, will perform a similar show in Baghdad for the Iraqi soldiers who continue to resist Coalition troops.

Band members have agreed to deliver the same pyrotechnics that led to a blaze that killed 97 concert-goers in the nation's northeast earlier this year. War strategists believe that Iraqi troops and rebels are "highly likely" to attend such a free concert in the Baghdad Civic Center, while band members look at it as a way of "giving back" and making amends for the catastrophe that occurred earlier this year.

A congregation of these troops, consequently, would be an easy mark for the free-flowing pyrotechnic show that has already proven itself as deadly, even in the setting of a large city in a civilized nation where rules and regulations were in place to prevent such a tragedy. "Baghdad has, to our knowledge, no requirements regarding fire alarms, fire exits, maximum capacity levels, and the like," stated General Warren Ashcarthy. "Attendees would be a captive audience of sitting ducks," he added.

Coalition forces would back off on skirmishes and advances just days before the scheduled concert, creating an atmosphere that appears sedate or even friendly as the American rockers arrive for the show. The Baghdad Civic Center, with a capacity of 26,000, would likely be packed for a "Republican Guard Show Only" performance, experts believe.

Band members and their crew would be the only ones allowed to escape the inferno via a specially designed escape route, which would be rehearsed in the days before the show. Lost musical equipment would be replaced in the event Great White plans on touring within the US again anytime in the future.

Crawford, TX (AP) - At approximately 6:55 pm today, a ranch bomb exploded near President Bush while he was calmly eating dinner.

Greensboro, NC (AP) A local dude's brother turned fifty-something yesterday, the dude thinks, as the dude is thirty-eight and his older brother is "about that much older."'