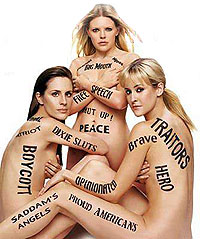 Washington DC (Reuters) - Earlier today, a crowd of over 500,000 gathered at the mall in Washington DC to honor war victims, war heroes and their families. Celebrities and politicians made speeches, shook hands and doled out numerous autographs.

The festivities began with Vietnam Veteran George Vigil honoring the war heroes with a 21-gun salute using his original guns issued to him during the Vietnam war. Mall officials weren't too happy, however, as windows in Foot Locker, Camelot Music and Payless Shoes were shot out.

The Washington DC Fire Department also showed up later due to complaints of overcrowding and forced the crowd to disband. "The mall was not designed to hold this many people," fire chief Nick Parker stated, "We had to do something and we had to do it quick."

Several celebrities had a chance to speak before the party was broken up including Ralph Nader, Gary Coleman and The Dixie Chicks. Show sponsor Jeffrey Johnson said that "Vigil was getting into a frenzy honoring this person and that person and then he saw the Dixie Chicks in the crowd and started honoring them, too!"

Dixie Chicks spokesperson Mary Nadrak stated, "The Dixie Chicks were only here at the mall to shop at The Gap and Lane Bryant when they saw the rally. At first they thought it was an anti-war party and went to join in."

Dick Heffington, long-time friend of Vigil, said, "George called them up on stage for no reason whatsoever and they just basically milled around for a few minutes until show supervisors pulled them aside."

The gathering was considered a success even with the mishaps and unscheduled speakers, including the sprinklers being set off twice. Vigil has stated that he plans to travel the country in the next year honoring different people for different things.

New York, NY (AP) - With the war still raging in Iraq, the Committee for Cool War Names (CCWN) has nominated and picked their winners for the Coolest name of the 2nd US/Iraqi War.

Crawford, TX (AP) - At approximately 6:55 pm today, a ranch bomb exploded near President Bush while he was calmly eating dinner.