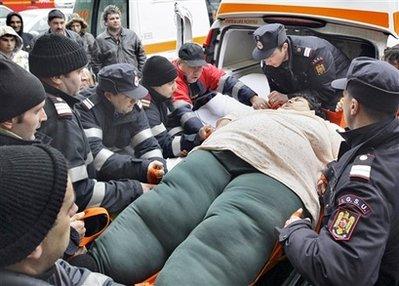 Victoria Lacatus, a 25-year-old pregnant woman weighing 528 pounds, is lifted by firefighters out of an ambulance in Bucharest, Romania. Lacatus gave birth to her first baby on Thursday, Feb. 18, 2010, at a hospital equipped to treat obese people. Attempts to reach the father, however, have been unsuccessful although authorities would only like to know, "How and why," one official stated. "The how, of course, which leaves physiologists pondering the mechanics of it all, and then the why, which leaves the behavioral scientists at a complete loss without that answer. Then, back to the how for a while." (REUTERS)